And now for something different...

I've wanted to share these for a while and since the movie is out on dvd and Blu-Ray I figured it would be okay to share with all of you now.
Back in the spring, I was asked to join a small team of artists working for DC Licensing to do artwork for the JONAH HEX movie. I haven't seen the movie but I believe these were to be used for the opening credits. I was given very, very rough sketches done by Eduardo Risso and instructed to ink them in Adobe Illustrator, matching his style and using my best judgement to finish areas not sketched in. I poured through a lot of his work, studying what he does and why. And here are results of three of six that I did. 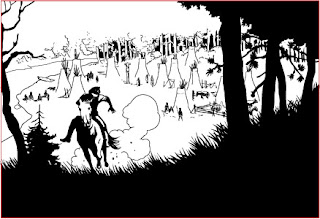 Another challenge to these pieces is that various elements had to be done on separate layers. For example, in the first one, I had to do the trees in the foreground in one layer, Hex and the horse in another, and the background in yet another layer. But here is the tricky part, everything you cannot see that is blocked by the foreground trees still had to be drawn out. This is where some pieces got trickier than others but it also gave the studio the chance to do limited animation with each piece. 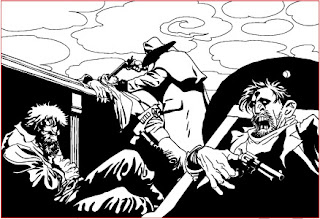 It was a quick turnaround project and I did six of them. I'm pleased that the only change I was asked to make was to make the grass in the top image a bit fuller. My first pass at the grass didn't look as good. 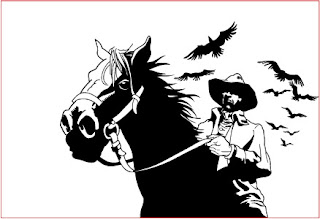 Jonah Hex © DC Comics
It was a fun and I hope to be involved with more projects like this one.

Best part of the whole movie.

Haven't seen the movie in part because I am in the minority of adult males in that I don't like Megan Fox. I will catch it on DVD at some point I am sure. I can't wait to see the debut of Gene's movie art in the opening credits.

I've yet to see the movie, but I have more incentive now!