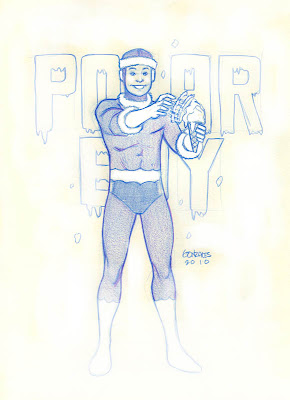 Polar Boy © DC Comics
Once again it's a sketchbook day, but today I drew my inspiration from the SUPER DC CALENDAR of 1976! (Which works day for day perfectly as a 2010 calendar). According to the calendar today is the birthday of Polar Boy, leader of the Legion of Substitute Heroes. That group of heroes that didn't make it in the Legion for one reason or another. But then Polar Boy is the "little sub that could" in that he eventually became a Legionnaire and if I remember right, their leader. So lift a frosty mug to Polar Boy today!

Email ThisBlogThis!Share to TwitterShare to FacebookShare to Pinterest
Labels: Legion of Super-Heroes, sketchbook

Very "cool." Like the "font" you used in the background. It almost puts me in the mood for a polar bear ice cream treat!

Thanks Royce! Ooooo Ice cream. That would be perfect with our 70 degree weather down here. :)

I find it fascinating that the 1976 and 2010 calendars are correlated! Maybe one of Polar boys secret powers!